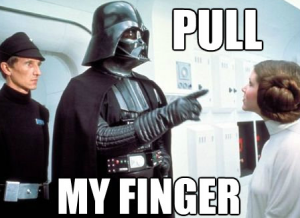 We have all heard the phrase “everything in moderation”, but can this also apply to sewage? If you ask any sewage backup San Diego company if there are benefits to having small amounts of black water around the home, they will look at you like you are insane. On the surface, no; even trace amounts of raw sewage can pose deadly consequences to human health. But if we tear down this question in a reconstructionist theory of thought, we could argue that outside factors may be good for people—your farts and the flatulence of others.

Do a Cartwheel Because Farts Could Heal!

According to a scientific study on smelling farts researchers reveal that smelling flatulence can help prevent heart attacks, strokes and cancer. A team of researchers at Exeter University concluded that while large amounts of hydrogen sulfide can be deadly (like in a sewage spill), the smelly gas produced by human bacteria as it breaks down in the gut and exits the body (known as cutting the cheese) contains a small enough amount that may be good for you. So the next time your brother cranks one out in the car you may want to refrain from punching his arm and instead sniff the malodorous air and hope that the noxious fumes fortify your brain to fight off your risk of a stroke!

Depending on how juvenile your friends, family, or coworkers are, you may have experienced pulling one’s finger in which a fart is released by the perpetrator. Often, these jokesters will complain of carpel tunnel syndrome or swear they have a bad cramp in their finger, but in reality the victim is left with a foul smell. When people “pass gas”, as it is commonly referred to in polite company, microscopic amounts of feces can float out into the air and enter your nasal cavity. But don’t go running to your HR  department over a finger-pulling prank just yet as while the IT guy’s “fart prank” may have offended you, the fact that he “cut a ripe one” may just lower your chances of getting cancer!

Just look at it this way: the amount of feces in raw sewage that can spill into the home from a toilet overflow or permeate your yard via a ruptured septic tank should be avoided at all cost. But sniffing an air bagel that measures point seven on the Rectum Scale could just usher in better heart health!

Hey, if you can smell it, don’t quell it! If you have a sewage problem in your home phoning for water damage restoration services should be top priority to fight off bacterial infections, water damage and mold growth. But if a friend sprouts a bean flower while you are standing in the elevator, thank him and wish for good health!